Rocking at Built Upon a Rock Fest

When the day’s emcee Father Ryan Moravitz asked the crowd at Built Upon a Rock Fest Sept. 17 if they wanted to do it again next year, there was no mistaking the answer in the big cheer that followed.

The gorgeous late summer Catholic rock concert drew more than 900 people, including about 70 volunteers, to the grounds of the Holy Rosary campus of Stella Maris Academy, while across the street at the Cathedral of Our Lady of the Rosary, people prayed in Eucharistic Adoration. 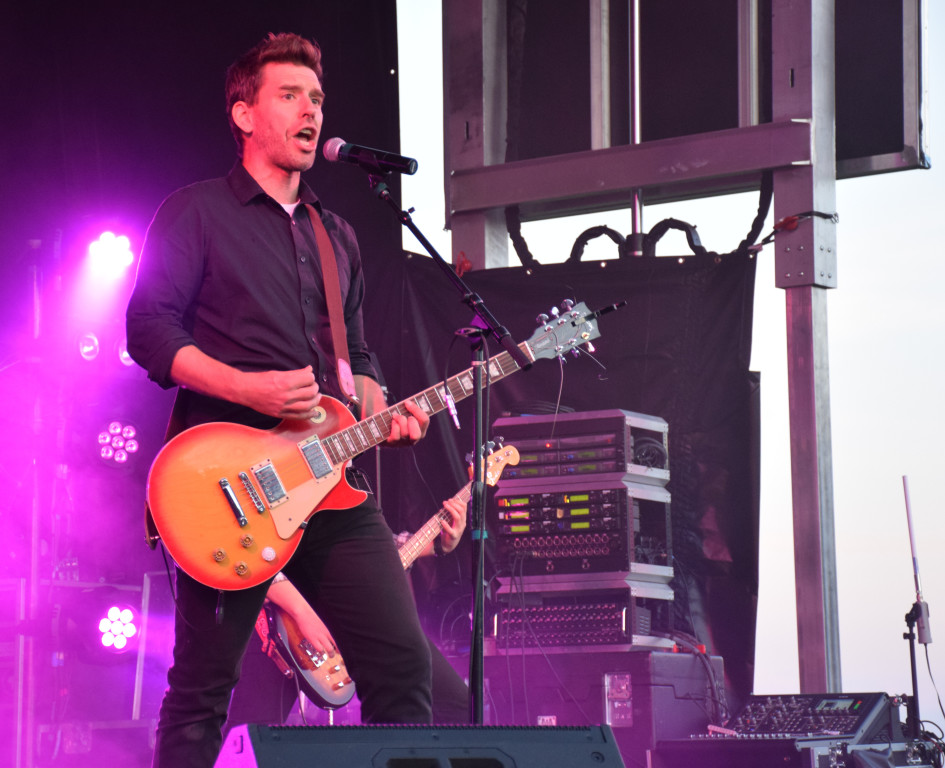 Against the backdrop of Lake Superior, eagles soared overhead, and a long line formed for the free food — as well as warm drinks like cider as day turned to night and temperatures dropped into the 50s.

A crowd that included Bishop Paul Sirba and numerous priests, deacons, and seminarians in addition to lay faithful from every corner of the diocese ranging from babies to grandparents listened and danced first to the local Aly Aleigha Band and then to headliners The Thirsting.

The whole thing was undoubtedly loud enough to be heard throughout the neighborhood.

When The Thirsting hit the stage and the volume went up, many of the crowd’s younger members made their way up close to the stage to rock out, as the band played its own hits and made Catholic or local riffs off of Lynyrd Skynyrd’s “Sweet Home, Alabama” (“Sweet Home, Minnesota”), Queen’s “We Will Rock You,” and U2’s “Where the Streets Have No Name.”

The band’s high-energy frontman, Daniel Oberreuter, also tuned things down a notch in the middle of the band’s performance, doing a set of his acoustic songs. Throughout, he encouraged people in their devotion to the Eucharist and the rosary.

The event closed at the Cathedral, with confession and Benediction.

Marie Mullen, who had the original idea for the festival after encountering The Thirsting’s music, said it was amazing watching people enjoy the vision come to life. “I knew that the music would have a good impact on people,” she said.

But she was also in awe of the many people who had come together to make it happen, especially the sponsors who overwhelmed her with their generosity, making it possible to put on the event free for all in attendance, and the volunteers.

“I was in awe,” she said. “For me personally, the thing that I was most touched by was just the volunteers. They were all just serving so willingly and lovingly and humbly. I could see Christ in each one of them.”

“Everything was so efficient, and there was always someone to help do something,” she added.

She also relied on the help of her brother, who owns the staging company.

And she noted that the crowd didn’t really fill out that field — which includes Duluth’s most famous sledding hill — at all.

And yes, she and the team of organizers, which also included David Walsh, Kevin Pilon, and Ben Foster, are already thinking about next year, and they even have bands in mind.

“We’ve got a lot of feedback,” Mullen said. “People are desiring it to be an annual event. We feel like that’s what God is desiring too.”

It’s still early and nothing has been arranged yet, but Mullen said if they are able to continue with the event, there may be some tweaks with logistics and timing, but the core of the event was what organizers were aiming at, with the simplicity of a Catholic concert that’s easy for busy people to do.

Through it all, Mullen says God was in charge and “blew her away” at every turn. “His hand was in it so much.”